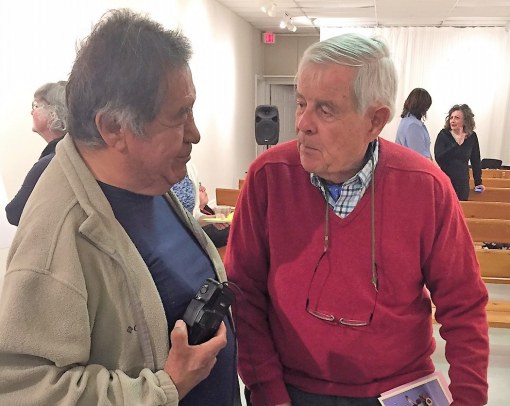 Several Indigenous guests from Georgian Bay area reserves were among about 60 people who attended the author talk and book signing for  Spirit Builders by James Bacque on May 20, 2017 at the Huronia  Museum  in Midland, Ontario.

Spirit Builders celebrates the hundreds of years of friendship and cooperation between European settlers and various Indigenous peoples across Canada that are now being restored after a century of damage including the residential schools tragedy. Through Frontiers Foundation, founded in 1964 by Charles Catto and its Operation Beaver volunteers, thousands of houses were built over fifty years with the cooperation of First Nation and Métis communities across Canada.  This initiative also formed the basis for, and helped to lead the campaign by the federal government to build over 120,000 houses through the Rural and Native Housing program.  Fifty-two houses were built in Port McNicoll, near Midland under this program in the 1970s with help of Operation Beaver volunteers.

Photographic displays illustrated  projects in Port McNicoll, Rama, Christian Island and Parry Island. From the Beausoleil First Nation  of Christian Island came Bill Jamieson and his sister Myrtle, and from the Wasauksing First Nation  on Parry Island, Conrad King and Dave Rice. Conrad, pictured above, spoke movingly of his life changing experiences as an Operation Beaver volunteer, starting at the age of 14 on Parry Island and later for many years on Frontiers projects all across Canada from James Bay to the high Arctic.

Barbara Catto, Charles Catto’s widow was also present with their daughter Linda to hear Charles described with warm affection by the author.

Following Catto’s death, Frontiers Foundation was bankrupted in 2016 by the withdrawal of government subsidies and by public indifference.  Frontiers nevertheless left a legacy that is still paying dividends.  Volunteers from around the world are helping teachers throughout the Canadian north under a Frontiers-inspired education program now run by Canadian University Students Overseas.