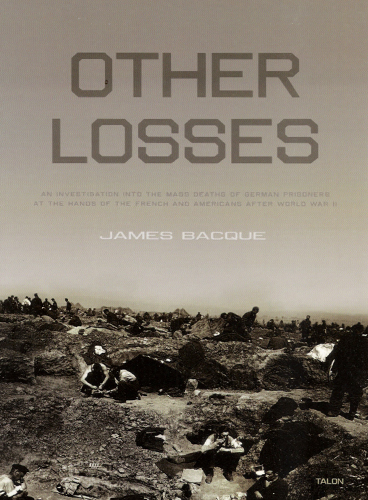 Other Losses: an Investigation into the Mass Deaths of German Prisoners at the Hands of the Americans and the French after World War Two caused an international scandal when it was first published in 1989 by Stoddart, Toronto; MacDonald, London and Ullstein Verlag, Berlin (Der geplante Tod: Deutsche Kriegsgefangene in amerikanischen und franzözischen Lagern).

Bacque revealed that as a result of the policies of the Western Allies, some 1,000.000 German captives in U.S. and French camps in Northern Europe had died of maltreatment, exposure, disease and starvation. This important work has remained in print through many editions.  Over 200,000 copies have been sold in eleven countries. Displayed are the covers for some of the foreign editions.

Other Losses: an Investigation into the Mass Deaths of German Prisoners at the Hands of the Americans and the French after World War Two.

View a related video below, or go to James’ YouTube page Peace for Germany.

Peace for Germany is a brief video which describes recent efforts at reconciliation between Germans and Americans.

On October 31, 2011, retired US Army Major Merritt Drucker arranged for an international  meeting, held in Washington, in which he apologized for the maltreatment of German POW held by the Allies.

Former Bundeswehr officer, Colonel Max Klaar accepted the apology and presented a proposal for an official peace treaty, between Germany and the Allies.  No treaty has ever been signed to end that war, which therefore continues with the occupation of Germany by 100 US military bases. James Bacque introduced the latest edition of his book, Other Losses.

Witnessing  the ceremony with approval was a former Senior Historian of the United States Army Center for Military History Col. Dr. Ernest F. Fisher. Fisher had collaborated with Bacque in all the basic research for Bacque’s pioneering work and wrote the Foreword to Other Losses.

5 reviews for Other Losses